On this and the following pages we take a look at every member of the ten strong class 44.

Known as 'Peaks' or 'One to tenners' these locomotives were the forerunners of Classes 45 and 46, the nickname 'Peaks' was carried over to these types. The design of the type was greatly influenced by the LMS' pair of main line diesels (10000 and 10001) which entered traffic in 1947, the first British mainline diesel locomotives. They were designed by H.G. Ivatt Esq and used English Electric traction equipment. The 44s had crompton Parkinson electrical equipment and a Sulzer 12LDA28 diesel engine of 2300hp

Amazingly two Class 44s survive today in preservation, 4 and 8. Number 4's preservation history is well known and the locomotive has visited a number of preserved railways. During 1998 it was repainted into BR blue (at last!), a nice reflection on the last few months of the type on BR.

Number 8 initially went to Scotland and acquired the name of a Scottish mountain in the process. After a few years it migrated south again and is finally in running order and once again named Penyghent.

The class ended their service based at Toton Depot who were really proud of them. towards the end the locomotives were kept in immaculate condition.

Below is an official view of 10000, click on this to continue! 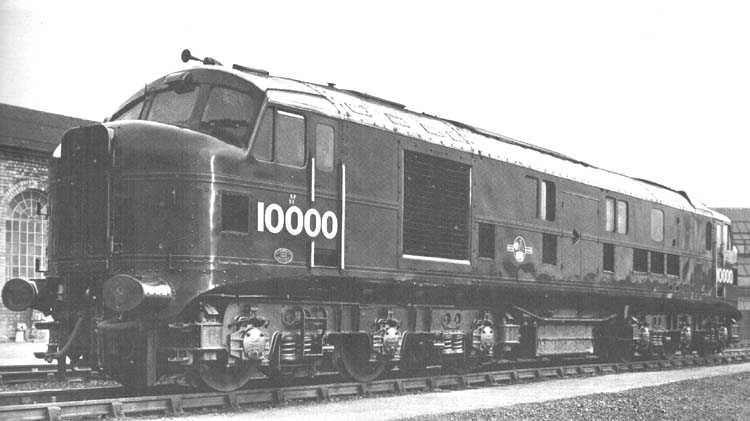