A Journey Along The Cambrian Line

The last regular stronghold of Class 25 locomotives was the Cambrian line, Summer Saturdays, especially during 1984 (the year of the rat!) saw Members of the Roadshow out and about. The maximum mileage possible off the class was 666 which solely depended on a tight connection at Newtown. This was only ever made once and by one person (Me! smarm smarm).

The highlight of the journey was on the way from Aberystwyth to Shrewsbury, the formidable Talerddigg incline after Machynlleth. Quite a few locomotives gave up during the assault.

Below we have a view taken at Shrewsbury on 21st August 1982. 25184 waits with the excellent 25083. The locomotives arrived from Wolverhampton and have run round their train. For those who really want to know the Class 08 shunter on the extreme left is 08802! 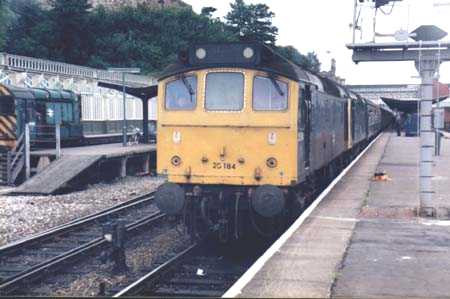 Next a classic view of Aberystwyth with 25303 and 25249 awaiting departure with the 1010 service to London Euston of 16th June 1984, which the locos worked through to Wolverhampton. Note the narrow gauge vehicle visible, this is the adjacent Vale of Rheidol steam line. 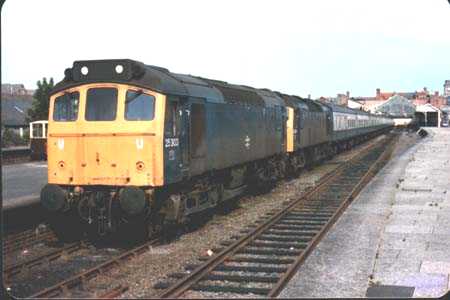 As the line was mostly single trains needed to pass at stations although there were other passing loops in between. Returning to the summer of 1984 the venue here is Newtown station. On the left 25311 leading 25298 wait patiently with the 1010 Aberystwyth - London Euston as 25224 leads 25042 into the station with the 0735 London Euston - Aberystwyth on 7th July 1984 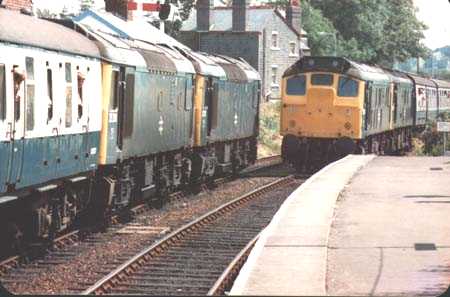